It was Ben Franklin - of "early to bed and early to rise" fame - who is credited with the creation of Daylight Saving Time.  But it wasn't until World War I that the concept really saw the light of day.  Germany adopted time change to reduce artificial lighting in order to save coal for the war effort.  The U.S. quickly followed in 1918 - for States that chose to observe it.

With the dawn of WWII, Daylight Saving Time became mandatory for the whole country as a way to save wartime resources.  Energy saving has always been the idea behind Daylight Saving Time but it may not be an idea whose time has come.  The use of artificial lights drops but increased air-conditioning use more than offsets any gain according to research conducted by Matthew Kotchen, economist at the University of California in 2008.  Hendrik Wolff of the University of Washington concurred:  "The extra hour of daylight in the evening means that people come home from work to a warmer house.  They turn on their air-conditioning.  Northern States might be a slight winner because the North doesn't rely as much on air-conditioning as does the South.  It's definitely a loser in the South where there is more energy consumption under Daylight Saving Time."

The debate continues.  In a nationwide American time-use study conducted some years ago, when Daylight Saving Time kicks in, television viewing is substantially reduced as people enjoy more time, later into the evening, outdoors.  But a chronobiologist in Munich cautions that his studies show that our body clocks - set by light and darkness - don't adjust to gaining an extra hour of sunlight during Daylight Saving Time.  Til Roenneberg contends that, "The majority of the population has decreased productivity and is just plain tired."

Standardtime.com says that the energy-efficiency claims of daylight saving time are unproven.  They write:  "If we are saving energy, go year-round with Daylight Saving Time.  If we're not saving energy, drop it!"  Seize the Daylight author David Prerau says that his research suggests that most people are fond of it.  He writes:  "The first day of Daylight Saving Time is really like the first day of Spring for a lot of people.  it's the first time they have some time after coming home from work to make use of the Springtime weather.  I think if you ask, most people enjoy having an extra hour of daylight in the evening eight months a year."

In 2005, Congress passed the energy bill that gave us the monthlong extension of Daylight Saving Time, which is nowwhy it begins the second Sunday in March instead of the first Sunday in April.  And, mark your calendars, Daylight Saving Time will end one week later than it used to, on November 4, 2012.
(SOURCE:  nationalgeographic.com)

The Coming of Spring...

An old man was sitting by the side of a frozen lake.  His locks were white with age.  He was alone as the darkest hour drew to a close.  His fire was nearly out but the wind was not so strong, the air was not so cold.

A handsome young man approached.  "Ah, my Son," said the old man.  "I am happy to see you.  Come, sit beside me.  I will tell you my wonderful deeds.  You shall do the same.  We will share the dawn of the new day."

"I am Peboan, the Spirit of Winter," said the old man.  "I blow my breath and the streams stand still.  The water becomes stiff and hard as clear stone."  "I am Seegwun, the Spirit of Spring," answered the youth.  I breathe and the flowers arise in the meadows and woods."

"I shake my locks," said the old man, "and the leaves fall from the trees.  My breath blows them away.  The birds fly to the distant lands and the animals hide themselves from the cold.  I shake my locks again and snow covers the land."

"I blink my eyes," said the young man, "and the warm showers of soft rain fall upon the Earth.  The flowers lift their heads and the grass grows thick and green.  My voice recalls the birds:  Come, fly joyfully from the southland!  The warmth of my breath unbinds the streams and they sing the song of Spring.  All Nature rejoices."

Their conversation stopped and, as they became silent, a wonderful change took place.  The Sun rose and a gentle warmth spread over the place.  Peboan's head drooped.  The Robin and the Bluebird began to sing.  The stream murmured.  The fragrance of opening flowers came softly on the breeze.  Seegwun rose to his feet.  Peboan sank down, dissolving into tiny rivulets of water that vanished under the brown leaves of the forest's ground.

Thus, the Spirit of Winter departed.

The Legend of the Dogwood 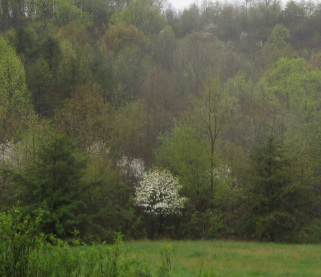 Strong & firm with branches interwoven
The dogwood - for the cross of Christ - was chosen.
Distressed was He at the use of its wood
And made a promise, which still holds good:

“Never again shall the dogwood grow
Large enough to be sadly used so.
Slender & twisted, it shall be
With crosslike blossoms for all to see.

In time here on remember Me
Crucified on the dogwood tree.
Cherished by Me shall it ever be.
A reminder to all of My agony.”  [Author Unknown]

Palm Sunday commemorates Jesus’ triumphal entry into Jerusalem and is celebrated on the Sunday before Easter in the Christian community.  According to all four Gospels, Jesus’ entry into Jerusalem symbolized his entry as the Prince of Peace.  A king chose to ride upon a horse when he was bent on war but rode upon a donkey to point out that he was coming in peace.  In many lands, it was customary to cover the path of one thought worthy of the highest honor.  The palm branch was a symbol of triumph and victory in Jewish tradition, and the Gospel of John specifically mentions that the crowd lay palm fronds upon the ground as Jesus entered the city.

Christian churches observe Palm Sunday with the distribution of palms, pussy willow, olive, or other branches.  In many churches, palms are reserved to be burned the following year as the source of ashes used in Ash Wednesday services.  In India, marigolds are strewn upon the floor of the sanctuaries.  In Latvia, Palm Sunday is called “Pussy Willow Sunday” and pussy willows – symbolizing new life – are blessed and distributed.  In Malta, the olive branch is used to commemorate Jesus’ praying in the Garden of Olives.  People place them in their homes because the blessed olive branch is thought to keep away disease and the evil eye.

The motto of the HMS Nelson and the University of Southern California is the Latin  “Pamam qui meruit ferat” which means, “Let him bear the palm who has deserved it.”  In Christian art, martyrs were shown holding a palm frond; representing victory, and the palm depicted on a tomb meant that a martyr was interred there.  [SOURCE:  wikipedia.com]

Palms are often hung over a doorway in Eastern European homes and may be woven into crosses, braids or other decorative shapes.

The Symbol of the Christian:  The Fish

Fish can be woven from palm fronds or ribbon. You need two strips 20-in. long, 1/2 to 1 in. wide. Contrasting colors of ribbon are used here are to make the illustrations clear and the weaving pattern easier to follow.

1. Fold the two lengths in half. Insert red into green as shown.

2. Flip the top red length down out of the way. Take the back green length and fold
it around the back red.

3. Take the front red, go over the top green ribbon from the front, continue behind and down through the loop you just made in the center.

4. Bring the same red around the bottom green from the back and weave it back up into the same green loop. Tighten the weave until you see the 2 X 2 checkerboard pattern.

5. Angle your fish so all the ribbon tails are toward your right. Take the bottom green and create a new loop toward the front on the bottom; weave the tail back up through the red it comes from and continue to the back, exiting in the middle row (leaving the new loop open to be used later).

6. With the upper green tail, create a similar new loop toward the front and going under the bottom red tail and over the top (skipping the middle section, where there isn’t any ribbon yet and again leaving the new loop open to be used later).

7. Weave the top red tail toward the back (locking the top of the loose green tail created in #6) ending on the left. Weave the bottom red tail around the back and through the two green loops you created in 5 & 6.

8. Notice that the fish's nose is now facing right. Secure the bottom green tail by weaving it through the front bottom row. Cut the fish’s fins at an angle or into forked shapes.

A dab of glue on the stress points (i.e. the nose and where the fins exit) will help the fish hold its shape. You’re done!

P.S. There is a front and back to this woven fish. The weave on the back is not uniform. You can create a fish with two "good" sides by gluing two of them back to back.  [SOURCE:  theartfulcrafter.com]

The renowned Norman Vincent Peale  wrote of this book, "Now and then, every fifty years or so, a truly great "Life of Christ" appears.  In my opinion, this is one of the most distinguished books of our time."  It was published in 1949.

Charles Fulton Oursler (1893 - 1952);  American journalist, playwright, magazine & newspaper editor and writer, was raised in a devout Baptist family but declared himself agnostic at the age of 15.  Oursler was fond of magic and was an associate of Harry Houdini in his crusade against fradulent mediums in the 1920s.  He wrote short stories in the mystery and detective genre early in his career under the pseudonym Anthony Abbott.  His second marriage was to one Grace Perkins; actress, novelist, and non-practicing Catholic

In 1935, the Oursler family toured the Middle East.  On the journey home, he began writing a book entitled "A Skeptic in the Holy Land."   He later wrote, "I almost converted in the last chapter."  In 1943, he did - convert to Catholicism.  Perceiving the growing threat of Naziism and Communism he was increasingly drawn to Christian ethics.  His son, Will Oursler, converted to the Catholic faith a year later, his wife returned to the faith a year after that., and his daughter converted in 1948.

Oursler wrote "The Greatest Story Ever Told"  because he was astounded at how little people knew about the life and teaching of Jesus Christ.  He hoped to  "make it as interesting as a serial story in a magazine."   Oursler and his son also co-authored "Father Flanagan of Boy's Town."   Both books became popular motion pictures.  The former starring Max Von Sydow.  The latter - Spencer Tracy.  (SOURCE:  wikipedia.com)

Max Lucado began his ministry as a missionary in Brazil.  Today he makes his home in San Antonio, TX as Minister of Preaching at Oak Hills Church.  This popular Christian writer has sold 80 million books worldwide.

Minister Lucado shares his perspective on the final week of Jesus' life in his book,"And the Angels Were Silent,"  published in 1992.  Of Jesus he says, "He is the Redeemer who would rather go through hell for you than to heaven without you."

This thought-provoking book includes a study guide.  The author suggests, "Let's follow Jesus on his final journey.  For by observing his, we may learn how to make ours."