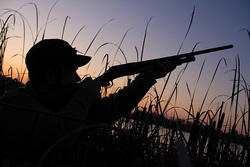 A blogger added up the deer license sales in just a handful of states and arrived at a striking conclusion:  There are over 600,000 hunters this season in the state of Wisconsin, making Wisconsin's hunters the eighth largest "army" in the world.  Impressive but yet eclipsed by the 750,000 who hunt the woods of Pennsylvania and Michigan's 700,000 hunters.  Now, toss in West Virginia's quarter million hunters and it literally establishes the fact that the hunters of these four states alone would comprise the largest "army" in the world even though the millions more who hunt the other 46 states haven't been counted in the equation. The point?  Hunters are America's home-grown firepower and hunting isn't just a way to fill the freezer.  It's also a matter of national securityl.   If we disregard any assumptions that hunters don't possess the same skills as soldiers, the question still remains:  What army would want to face 30, 40, 50 million armed citizens?         November 2012

In 1918, American composer, Irving Berlin, wrote “God Bless America” for a revue while serving in the U.S. Army but decided that it wasn't a good  fit and, simply, set it aside.  In 1938 with the rise of Hitler, Berlin; who was Jewish, then decided that it was time to revive his tune.  It was introduced by Kate Smith on her radio show broadcast on Armistice Day and became her signature song, while Berlin gave his royalties to the song to the Boy Scouts of America.

“America the Beautiful” was a poem written in 1893 by Katharine Lee Bates; an English professor at Wellesley College, while on a train trip to Colorado Springs.  To commemorate the Fourth of July, it was originally published by The Congregationalist in 1895 under the title “Pikes Peak.” The music was composed by a church organist; Samuel A. Ward.  Ward's music was only first applied to the poem in 1904.  Ward died in 1903 without ever knowing the national stature his music would attain.  Bates was more fortunate.  The song’s popularity was well established before her death in 1929.

This rendition of “America the Beautiful’ is performed by the USMC Drum &  Bugle Corps.   On a personal note, upon his high school graduation - son, Scott - was honored by the USMC with its "Semper Fidelis" Award for musical excellence.  At the time, Scott was a percussionist, specializing in tympani & four mallet marimba.  Today, Scott is an IT professional specializing in business intelligence software applications.  Only in America...