St Patrick, patron saint of Ireland, was born in 390 A.D. in Roman Britain.  At the age of 16, he was captured by marauders and sold into slavery to a Druidic Irish chieftain.  The next 6 years of his life were spent in servitude as a herdsman.  He learned the Celtic
tongue and the intricacies of aboriginal Irish religions.  In his writings, Patrick recounts how he spent those years in prayer, day and night. A voice he heard in his sleep compelled him to escape and find the ship that would carry him to freedom.  He did
– 200 miles away.  Patrick returned home to enter a monastery renowned for its learning.  His early priest- hood was spent in missionary work.  Eighteen years later, Pope Celestine I entrusted Patrick with the mission of gathering the Irish race into the flock of Christianity.  He returned to the land of his former master to pay the price of his ransom and; in exchange for the years of servitude he suffered, to impart the message of freedom that exists in being numbered among God’s people.  He traveled the coast of Ireland spreading the Word of God against the Druidism that held the nation captive.  Tales are told of the miracles Patrick performed to best all that Druid incantations could muster.  The legend that credits St. Patrick with banishing snakes from Ireland is not to be taken literally. Scientific evidence indicates that there were few, if any, snakes in post-glacial Ireland, but the serpent was the symbol of the Druids.

Legend also has it that Patrick used the shamrock, a three-leafed clover, to teach the
Christian belief in the Holy Trinity - three persons in one God.  It is said that he composed the old Irish "Prayer of St. Patrick," in preparation for his victory over paganism.  The prayer begins, "I bind myself today the strong virtue of invocation of the Trinity.  I believe the Trinity in Unity."  It would seem natural that Patrick used the shamrock in his ministry.  (SOURCE:  Wikipedia)

March 17th, believed to be the date of his death, is celebrated as St. Patrick's Day. 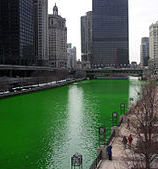 By 1910, the Irish population in major U.S. cities, such as Chicago, was greater than in Dublin, Ireland.  Each year, since 1962, the Chicago River is dyed green for the city's annual St. Patrick's Day Parade.  So is the beer.

Chicagoans, Mike Butler and his crew, are responsible for the secret formula that
transforms the river to a bright, environmentally-safe emerald green that lasts about
24-hours.  Each year, Mike and his crew receive calls to come and make their magic in rivers all over the world.  Only once since they began the process in 1962, have they gone elsewhere - to the River Lffey in Dublin.  For now, the Chicago River is the only place in the world lucky enough to be so magically transformed in celebration of St. Patrick's Day. 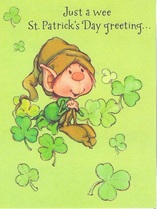 Thanks to m’darlin’ daughter-in-law, “MK”
& the nice Polish boy she married…
May God bless you & all the souls we hold so dear
… Scott, Andrea, Kev,
… Kelly, on this her birthday,
… and my dear “O’,” on this her national holiday.

The Messiah would be born of the House of David, King of Judea, according to Jewish prophecy and retold in the Gospels of Matthew and Luke.

Joseph of Bethlehem, descendant of David, was a young carpenter visited by an angel of God in a dream.  The angel’s mission was to proclaim that Joseph had been chosen to
accept the high trust of protecting God’s greatest treasures upon the earth - the undeniably pregnant Virgin Mary and the Son of God; the Messiah, she would give birth to.  Man of faith, Joseph espoused the girl and loaded up for the journey from Nazareth to Bethlehem; leaving the town where he worked for the city of his birth, as required by the call to census.

It wasn’t until the 15th century that the foster-father of Jesus became known as Saint Joseph.  The power of his intercession was championed by holy women; who would likewise be recognized in time as Saints: Brigid of Sweden, Bernadine of Siena, and Teresa of Avila.  They recognized that Joseph was an ordinary man on whom God relied to do extraordinary things and became devoted to following his exemplary life. In 1870, Pope Pius IX proclaimed March 19th as the day Joseph would evermore be recognized as the patron of the universal Church (God’s family), honoring Joseph’s  life of support, protection and guidance for his family.

Since that time, St. Joseph is invoked as patron for many causes worldwide: for working people; for fathers, craftsmen, emigrants and unborn children; against doubt and hesitation; for an end to drought; for the forgotten and for the dying.
It is written that Joseph died before the beginning of Christ’s public life but that his passing from this life to the next was in the arms of his Son, Jesus the Christ.

St. Joseph is especially honored by those of Italian and Eastern European heritage. From the 1890s-1930s,  waves of Polish and Italian immigrants faced a largely Irish Roman Catholic clergy that was unsympathetic to peoples they considered "inferior, primitive and overly superstitious." So Poles and Italians imported priests from the old country and created their own Polish and Italian churches to preserve their language and traditions.

Not to be outdone by huge celebrations of St. Patrick's Day on March 17th; just two days later on March 19th, St. Joseph's Day became a chance for Poles and Italians to express their ethnic pride with “the wearing of the red," a color that appears in both countries' flags and is prominent at the huge feasts known as St. Joseph's Table.

For Poles, it is Dzien Swietego Josefa.  Banquets are held in church halls with tables decorated in red and white, a statue or holy cards of St. Joseph, flowers and a donation bowl for the needy.

The Italian Feast of San Giuseppe began in the middle Ages when Sicily suffered a severe drought.  The desperate people begged St. Joseph for rain that they might be able to feed their families.  Rain came and averted the famine they feared.  They credited St. Joseph and commenced a huge “feste” to honor and thank him.

The custom survives in modern yet traditional Italian communities as St. Joseph’s Table or St. Joseph’s Altar - decked with flowers, fruit, and overflowing with good Italian food.  The father offers a prayer for St. Joseph’s aid in providing for and protecting his family.  People place a fresh green branch over the doorway to show that their homes are open to one and all. Celebrants  honor their patron saint while offering sustenance to  their fellow citizens who will not go unfed on this day.

My father, Andy,sold life insurance door-to-door when I  was young.  He was devoted to the families he  served – when stopping to receive the premium for their insurance; once a week in those days - and they to  him.  On the Feast of St. Joseph, Dad and his family were invited by the Giangotta family to partake of their St. Joseph’s Table.  I still remember the joy of it - the gift this wonderful Italian family shared.

St. Joseph's Day, the day the swallows come back to Capistrano, is an extremely colorful New Orleans celebration as well.  The concentration of Sicilian immigrants in New Orleans explains why this tradition is almost exclusive to this southeastern city. Most immigrants from Naples settled in New York and other cities along the eastern seaboard.  Sicilians "sailed from Palermo and landed in New Orleans.”

Handmade breads and cakes take the form of Christian symbols; the Chalice (consecration of the Bread and Wine at the Last Supper); the Cross (crucifixion of Christ); the Dove (Holy Spirit); Lamb and Fish (Jesus as the Lamb of God and the Fisher of Men).  A heart pierced by a dagger represents the grieving mother, Mater Dolorosa, and may bear the names of recently departed loved ones.

Wine bottles represent the miracle of Cana. Grapes, lemons, olives and figs recall the vineyards and orchards in Sicily.  Legends surround the lemon. To place lemons on the altar is considered a way of returning one’s good fortune to others, in remem-brance of times the lemon was considered a luxury.  A lemon blessed on the altar will not turn black and is a symbol of good luck.  Considered such good luck that it is common to surreptitiously take a lemon from St. Joseph’s table and leave coins for the poor in exchange.  Young married women who want to become pregnant need only to possess a lemon from St. Joseph’s altar.

Bread crumbs, "Mudica," are served as seasoning over pasta and symbolize sawdust.

Perhaps the most ubiquitous symbol to be found on the altar is the lucky Fava Bean. "The blessed bean” is the most well known of the customs associated with the St. Joseph's Day Altar. Originally grown for animal fodder, it thrived while other crops failed during one of Sicily's severe famines and became the sustaining food of the farmers and their families. The dried bean has since been commonly called the "lucky bean," and, legend has it, the person who carries a 'lucky bean' will never be without coins.

Sometime between 1515 and 1582, a European cloister of nuns prayed to St. Joseph to obtain additional land needed to build a school, hospital, convent… The reason for their supplication has not survived the passing of time.  What is told is that the nuns buried medals depicting St. Joseph in accord with their prayers, and their prayers were answered.   This old story lived on but the “tradition” changed along the line from burying a medal to burying a statue of St. Joseph - not to purchase but to sell property.  Over 2 million home sellers have since planted the idea.  Someone even wrote a book about the practice.  It’s called “The Underground Real Estate Agent.” 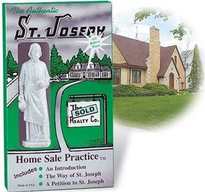 In fact, there are quite specific burial instructions  for ol’ St. Joe:  bury his statue in front of the house, facing the house, near the “For Sale” sign or close to the road (your choice);  most importantly, have faith - pray to St. Joseph during the burial and keep praying until the house is sold.

Once your house is sold, some say that you  simply leave the statue in the ground.  Others  recommend that you dig up St. Joseph and take  him with you to a place of honor in your new home.  You might need his help another day.

“Happy Nameday” to the most good-natured,
warm-hearted Joseph that I have ever known,
my uncle – a real “good Joe.”
~Pat Cieslarski-Patka-DeHart (March 2011)